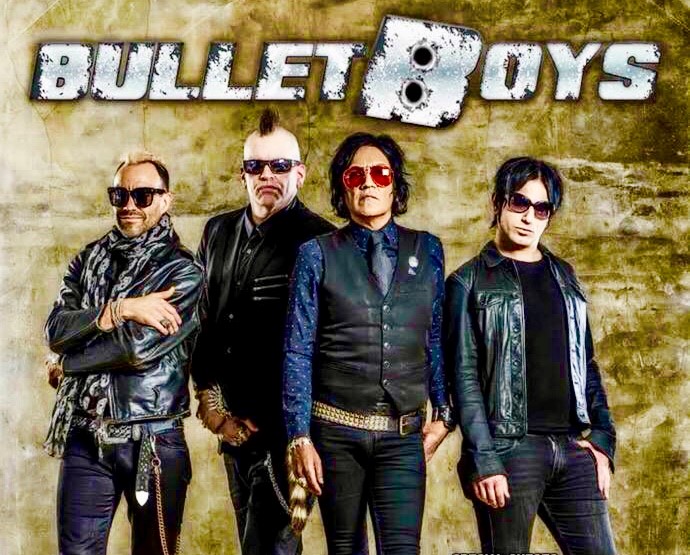 The BulletBoys began as a collection of talented musicians from high profile bands such as King Kobra and Ratt. Using their credentials, they were able to quickly capture the attention of music fans around the world while front man Marq Torien emerged as one of the most underrated vocalists of the era.
The BulletBoys formed in 1988 at the very peak of the Los Angeles glam metal movement. With record companies constantly searching for new talent, they possessed a pedigree that most bands would kill for. Unlike the other glam rockers of the day, the BulletBoys were more hard rock and blues fusion than pure hair metal. Thanks to comparisons to the likes of Aerosmith and especially Van Halen, talent scouts came running and the band quickly received their first major label contract.
BulletBoys: Self-Titled Debut Album With hard rock guru Ted Templeman producing, and a deal with a label that specialized in their brand of hard rock, their self-titled debut was destined to be an instant success. Having previously engineered acts such as Van Halen, Van Morrison, Doobie Borthers, Linda Ronstad, Montrose, David Lee Roth, and other classic bands on his resume, Templeman was viewed as a bona-fide hit maker and became a natural fit for the BulletBoys.
The BulletBoys album dropped in 1988 with the driving single “Hard as a Rock” becoming an instant fan favorite. The thumping rock continued with the following hits, “Kissin’ Kitty” and “F#9.” Escaping the trends set by most bands of the era, the BulletBoys opted not to include a power ballad on their album. Instead, they kept the rock and blues coming with the smash hit single “Smooth Up in Ya”. After a successful cover of the classic blues song, “For the Love of Money” The BulletBoys officially established themselves as the leaders of party rock.
Following the album’s release, lead singer Marq Torien quickly began drawing comparisons to David Lee Roth and Terrence Trent Darby. Not only did they share similar vocal styles, but Torien brought the crazy energy and showmanship of Diamond Dave and his soulful motown style vocals to excited, crowed live audiences every night. With the band’s success, they secured a coveted touring spot opening for Bon Jovi, followed by other tours pairing them with Ozzy Osbourne, Cinderella and Living Color, which led to massive headlining gigs. The consistent hits and touring eventually paid off, and vaulted the BulletBoys to platinum status.
BulletBoys: Freakshow The long touring schedule kept the BulletBoys from the recording studio for years. The harsh evenings of never-ending shows took a toll on Torien’s voice, forcing him to recuperate before they could complete their second album, 1991’s Freakshow. Keeping the driving hard rock alive and with Marq Torien’s banshee screams in full force, the BulletBoys were officially back. The wave of singles which included “Thrill That Kills,” as well as the MTV video standouts “Hang on St. Christopher” and “Talk to Your Daughter” became popular favorites which could be heard bursting from car stereos all over the country.
BulletBoys: Za-Za After another busy tour schedule, the BulletBoys reentered the studio to record Za-Za in 1993. Packed with a wide variety of music that touched on everything from power ballads to party themes, Za-Za featured the popular songs “Laughing with the Dead”, “When Pigs Fly,” and “The Ballad Mind.” Unfortunately, the constant strain of exhaustion and internal strife pulled the group apart, resulting in all of the founding members leaving, except for Marq Torien.
BulletBoys: Future & Rock The Bayou The BulletBoys continued to tour and release the albums Acid Monkey and eventually Sofie, surviving throughout the grunge era and outlasting the nu-metal craze. Greatest Hits: Burning Cats and Amputees reunited the BulletBoys’ original superstar lineup temporarily in 2000, to the delight of fans nationwide. Torien continued to keep the group alive, as the 2007 release Behind the Orange Curtain was well received by critics and fans.
BulletBoys: 10c Billionaire In 2009, Bulletboys released 10c Billionaire on Chavis Records, the sixth successful album from the rock warriors. In its first week of sales, the new record burst onto the Billboard Charts at #6 in top internet sales, signifying Torien’s ability to keep the band alive for over 20 years and surviving throughout the test of time. The group continues to tour in support of 10c Billionaire, and will appear on many of the top music festivals in America during 2010.
BulletBoys: Elefante’ In 2015, Marq Torien released Elefante’ on Cleopatra/Universal Records, produced and engineered by Ryan Greene, Marq Torien & Matt Thorne, In it’s first week of sales, then new record landed onto the CMJ charts at #9. This stellar album is an expertly assembled eleven song collection of Hard Rock and Heavy Metal, each track, beginning with the relentlessly pummeling “Rollover” and the acoustic-tinged quasi-Power Ballad “Symphony”, immediately commands the rapt and undivided attention of all parties involved. The group drives home each key focal point via a seamless blend of soaring vocals, blistering fretwork and imaginatively punishing rhythms. Amid various an array of numbing inanities. The initial excursions are as memorable as they are thoroughly satisfying. With Torien’s now-trademark über-slick delivery and a seemingly renewed sense of purpose paving the way, the group finds itself creating relevant, thought-provoking music in an era when so many of their remaining contemporaries find themselves completely reliant on the County and State Fair circuits for survival. This is quite possibly as good as it gets and trust me, you will not be disappointed.
BulletBoys: Greatest Hits

Thanks for another great show! Online ticket ordering is not currently available. Stay tuned for information on future events. Dismiss